The Project: Create a sculpture for a park on the corporate campus of Collette Vacations to honor the memory of Daniel Sullivan Sr., who built Collette Vacations into a global leader in the travel industry and celebrate the themes of travel, family, faith, and business.

Daniel Sullivan Sr. was a beloved father and leader. Many employees of Collette have worked there for their entire lives, a testament to the positive work environment and to how well the company takes care of its staff. Faith was an important element in guiding Daniel Sullivan and led to his creation of The Sullivan Foundation, which funds considerable charitable works and is the vehicle for Collette to give back to the community. He was a family man. He and his wife had seven children, all of whom worked at Collette for some period. His mantra was a list of priorities, “God, Family, Collette” which guided his life and the success of Collette.

The Challenges: The challenge was to come up with a design that would honor Daniel Sullivan Sr., without being funerary, celebrate Collette without being commercial, express the values that guided him and the company without being preachy, and be a beautiful expression of form that would enhance the landscape of the park.

The Solution: I puzzled on the idea of travel and realized that most people remember their travels through photos and reminiscing over photo albums. I proposed depicting Daniel Sullivan Sr. standing at a circular table with a map of the world in low relief on its surface, looking at a photo album. I sculpted in low relief, images from the his life, including a youthful portrait of him when he left the army after World War II, an image from his wedding, a playful image of him carrying his wife on his back, a picture of his seven children, a picture of him with two of his sons at Collette, and a picture of him and his wife standing in front of a pyramid in Egypt in their later years. Around the lip of the table is a hand-lettered inscription that reads, “Daniel Sullivan Sr. purchased Collette in 1962, beginning a journey which continues to this day. Collette still embodies the values he held dear, Family, Charity, and Exploration.” The figure gestures an invitation to the viewer to step in and view the album.

Recollections: The most obvious challenge for this project was the creation of a posthumous portrait in the round of Daniel Sullivan Sr. The family provided me with many pictures that spanned his life, but these often lacked the angles most useful for making a sculpted head. I ended up using the pictures as a general guide but relied more on the story they told as a whole. Between the pictures and the memories related to me from his family, I had a vivid picture of what I expect Daniel Sullivan Sr. was like and used this impression to intuit the portrait and figure.

Daniel Sullivan Jr., kept the details of the project hidden from the rest of the Sullivan family, so most family members saw the piece for the first time at the unveiling. Talk about pressure for a portrait artist! I was relieved and gratified by the welcome reception the sculpture received at the unveiling and the kind words of Daniel Sullivan Sr.ʼs close friends and family, who were moved by the quality of the likeness.

Watch a video from Sandor Bodo about the project and the dedication ceremony. 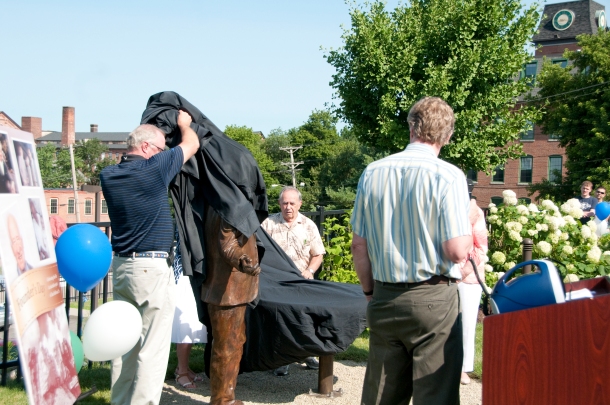 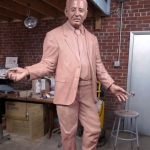